Made my own meme from funnies in head. 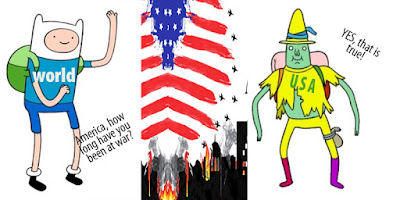 THIS is why I did not vote for her (nor 45). Well a few other good reasons too. But if non state Russians and Wikileaks brought me this truth, bless them for it.

So basically I voted based on precisely the reasons they are scaring you about Russia. They told me about my own people #Undermining #Democracy!

Get it? The very people that do it say go to war with those they accuse. #Enough. And now #Iran again? Our 50s coup wasn't enough?

"In 2016 a 2006 audio tape emerged that contains an interview by Eli Chomsky of the Jewish Press with Hillary Clinton. Clinton opined that pushing for elections "in the Palestinian territories ... was a big mistake", adding "(a)nd if we were going to push for an election, then we should have made sure that we did something to determine who was going to win."

They did worse. After Hamas won, your American #taxes paid for arming and training #PLO thugs to go attack Gaza citizens on the street and start a Civil War. Sound familiar? Over and over again and we the people don't learn.

It's coming here, next fools. Trump is the bugle! Just look at these names (your heroes):

"Vanity Fair has obtained confidential documents, since corroborated by sources in the U.S. and Palestine, which lay bare a covert initiative, approved by Bush and implemented by Secretary of State Condoleezza Rice and Deputy National Security Adviser Elliott Abrams, to provoke a Palestinian civil war. The plan was for forces led by Dahlan, and armed with new weapons supplied at America's behest, to give Fatah the muscle it needed to remove the democratically elected Hamas-led government from power. (The State Department "