Of Oysters and Pearl Harbor 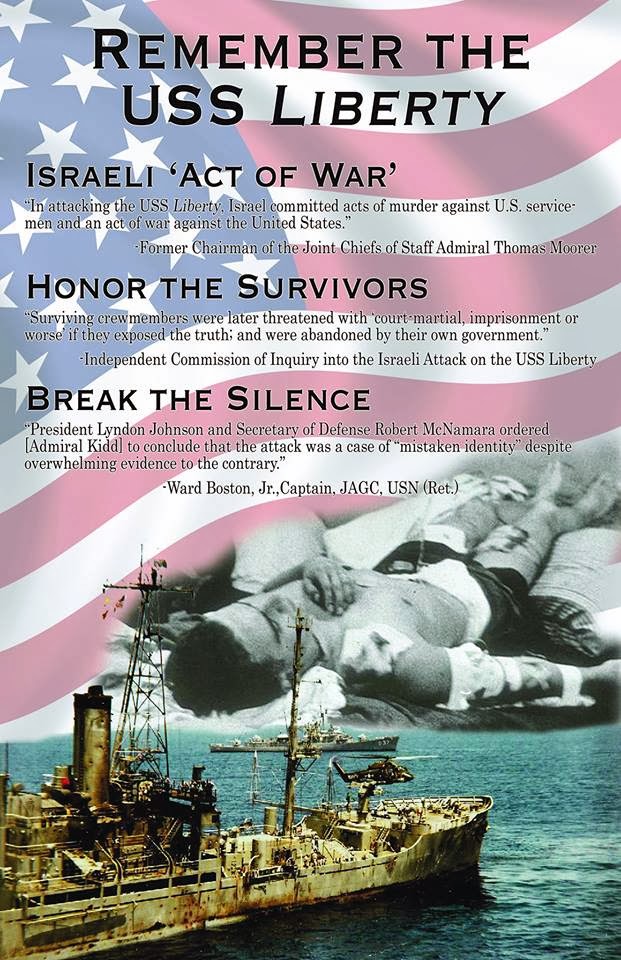 A whole Pearl Harbor has gone ignored, where Japan is Israel.

Until Friday in a major speech. Will there be some press?

No matter they'll say in outline, Israel saw plainly how the US flag flew proudly up and down our mast. Thus quite literally, yes apology, they could not match from an index of battleship-shapes listed in some misplaced Redbook of destroyers the non-war class vessel outside their borders but close enough to listen into such criminal  indiginous liquidation.

Worse than Hawaii harbor unproked attack, the one on Liberty, for which stands no monument, even though medals of honor for survivors were earned and rushed on out the door. It's as if we thanked Japan for attacking us all Pearl Harbory and then some more with bushels of money every year instead of Hiroshima, and rather than the rounding up of US Citizens and all their families and putting then in pens, gave all Israeli daddies positions of power in US government and allowed for dual citizen of the enemy within.

Years later as much forgotten is sainted Rachel Corrie US citizen, flattened right down into the stolen ground by Israeli army bulldozer for daring to defend defend poor Palestinians from ethic cleansing at the family's targeted front door. And to her parents too, drained of all their money seeking justice for their daughter in the courts of lies and twisted logic without a peep from the closest ally and democracy whose own citizen was murdered.

Remember Liberty. Remember Rachel. Americans ignored by even their own government at the hands who said never again.

They claimed they couldn't see her too, standing up on principles of human rights a bad mistake in (building) 'zones of war', and despite her orange vest and the howls and screaming STOP STOP of the wildy waving crowds, the tractor tread kept going anyway until it squashed the head and voice of protesting American citizen.

And here finally, it is, a survivor who was on board the ghost ship Liberty, who remembers first hand what no troll-pasted wiki article in comments can ever convey in spin. It's not the oops wrong country part in their apology.

It's the lengths of total murder and attack in waves of vicious weaponry gone mad in such cruel proportion that one wonders what this peculiar State means by "defense," when they proudly say it and to wonder still a little more how theirs the only army on the planet called both Defense and Force simutaneously in name.

His speech will recollect the day Israel tried to wipe out all our soldiers on board to silence witnesses to total crimes of war. Proven in court transcripts and by handwaves recollected up on deck by pilots so low overhead to our defenseless and unsusoecting ship and crew, there was no mistake that day.