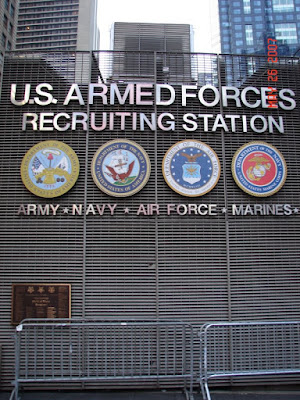 "Armed Forces" is one of those things that can't be allowed anymore to be uttered in the news, advertisements or recruiting offices. No, the States of America do not have armed forces. They have killing ones.

To say "armed forces" is like saying the guns and bombs never go off. Like guns are part of the uniform, no more animated than a shoulder patch or medals. Rest assured, these are indeed organized, trained young men and women pointing their guns and targeting devices AT PEOPLE and their HOMES and just plain killing them.

I mean, that's the whole idea.

So the next time you hear "U.S. Armed Forces," try replacing it with this phrase: "U.S. Killing Forces." That's what they do. So, say it. Oh yeah, and pay up. That shit's expensive.