Red, Blue and You

Fuck the whole thing about party. I am so sick of the ruse.

Country before party... that's the ticket. Red state blue state sounds so Dr. Suess anyway. Oh, these are Dems. Doze are Republicans over there. Well folks, we're all saps no mattter how you add it up cuz this Electoral College is a place you can never go to school. Another thing Empire we took right from Rome. Fall! Fall!

The founders appropriated the concept of electors from the Holy Roman Empire (962 - 1806). An elector was one of a number of princes of the various German states within the Holy Roman Empire who had a right to participate in the election of the German king (who generally was crowned as emperor). The term "college" (from the Latin collegium), refers to a body of persons that act as a unit, as in the college of cardinals who advise the Pope and vote in papal elections. In the early 1800's, the term "electoral college" came into general usage as the unofficial designation for the group of citizens selected to cast votes for President and Vice President. It was first written into Federal law in 1845, and today the term appears in 3 U.S.C. section 4, in the section heading and in the text as "college of electors." -- NARA website 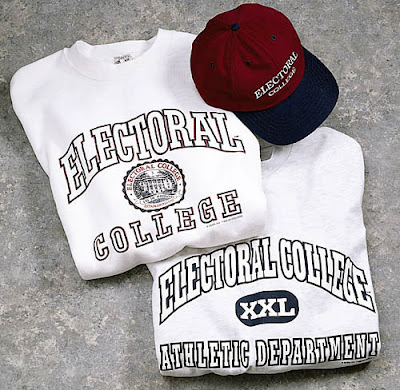 And where oh where in the Constitution does it say that the President has to be a wealthy man BEFORE considering a run for election? Nowhere.

But that's the case. Screw you average blue. Blame the party. All this money for running, and what does it buy? Commercials? Gas? Buttons and banners? Media? Votes?