Here Are Ten People so Choose a Party 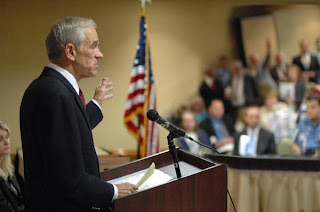 Call your local Board of Elections to see if you have to officially register to be Republican just to say "I want Ron Paul up front." Here's a guy who not only says it like it is, but does it too. I'm sorry comrades, but when the record speaks for a politician count me in.

No King, no Big Heaven, no Royalty elite -- and I'm sick to death of war. A third choice. Just can't do it in this on-off world.

So anyway I contact the local Elections Board to find out if Coke or Pepsi won't let me say I like Dr. Pepper the best of all. Turns out around here (I'm in North Carolina) , even though it's a primary election (yeah, that's right - the first step up many of a democratic action no-one ever decides to actually DO), it's all up to the other guys to let another in. The parties themselves can say yes or no to letting unaffilitated, registered voters into primaries to vote.

And goody for us, they both said fine. At least that's the state I'm in.

So we can vote for Paul in any state, in any primary, no matter what Party we are registered in!?

No, that's not true. It depends on the state. Call up local campaign offices to find out what the primary rules are in your area.

Florida is a CLOSED primary state. BY LAW only registered Republicans can vote in the Republican Primary.
In Florida you MUST register Republican to vote for Ron Paul.

This is VERY misleading. Election laws and partisan primary participation is determined by STATE LAW. Please look up your state and make sure that you register correctly by the due date and confirm your registration, then you can vote for Ron Paul in the GOP primary.

In Massachusetts, you must either be unenrolled (independent) or in the official party in order to vote in the primary.

Wow, democracy is alive! I said in the post it was my local elections office, jeesh! Anyhew I've re-worded it now so it dosn't imply total freedom, and kept with the same message no-one balks at:

Republicans and Democrats can keep out registered voters IF THEY WANT TO. That shit's deep. That was the original intent of the post.

So yeah, call the local office and check first. But if you're that politically savvy out there, you knew that already.

Capt. Mike...closed primaries aren't governed by state law. The state party makes up their mind as to who will be allowed to vote.

Freedom is a dying echo of a sound nobody liked. The Empire Never Ended.
When the ship is sinking, it seems ridiculous to keep dancing in the ballroom. Revolution is a a brand. America has jumped the shark. Time for all good men to jump in the water and swim towards an island. Thomas Jefferson, meet Hakim Bey.

You mean I registered Republican for nothing? I could have sworn that NC was a closed primary state, but I guess I was wrong. :)

Actually I am still happy that I registered with the stupid elephants. After voting for Libertarian candidates for years and years, I have finally come to grips with the fact that the LP (or any third party) just cannot seem to make any sort of impact on our Empire's policies (the best they can do at the moment is serve as spoilers in an election, which more often than not is not a very good thing at all).

The GOP actually has a Liberty Caucus for libertarian party members, which is more than I can say for the Dems. If change is ever going to happen it is going to have to start from within.

And, in the immortal words of Matt Stone, " "I hate conservatives, but I really fucking hate liberals."